Planning on switching to Garuda, have questions

Is the kde git version stable to daily drive?

What are the main differences between EndeavourOS and Garuda?

1 & 2 : looks like it to me that they have the Garuda packages if that is what you mean. (The Downloads page has a package list)

3: git versions aren't usually daily drivers for most people. However you can always try it.

4: Garuda has some nice maintenance tools and many defaults I like. Like SGS said, you can always try the live environments off a USB to see what you like and to test things out.

i can probably disable that by testing the live isos first.

Hmm, all I care is that packages work and i dont have to run
pacman -Syu every 5 minutes.

Here we run garuda-update instead. One of the many handy tools we have (rates mirrors, applies fixes, etc)

pikaur (its not the default aur helper there, i install it bc pikaur>yay)

Maybe you can use custom.cfg

if you come from Linux.

I have windows on this computer, and am planning to dual boot (so I can use windows if smth goes HORRIBLY wrong)

AFAIK paru is made by the same person as yay.

Is it possible to use pikaur instead? 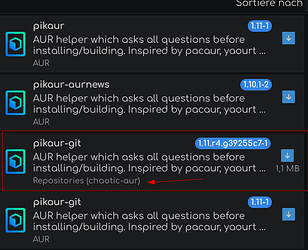 I know i sound like a newb, my thinking was that
garuda-update uses paru. Is it possible to make it use pikaur?

Either way, this is the beauty of Linux. Nothing forced on you (except on ubuntu, snaps are ninja installed)

I am typing this from the Dr460nized regular edition liveiso, and after tweaking the layout (not a mac user, dont care for the layout) im fine. If i switch the icons tho i end up with inconsistency. ill try installing and booting up some of my fav games :D! If it works fine ill stay, otherwise ill jump back 2 endeavouros lol

If i switch the icons tho i end up with inconsistency.

not a mac user