I got problem when I run sudo pacman -Syu:

Am I must remove os-prober-garuda? And If I replace that, what's the side effect of removing it?

os-prober-btrfs replaces os-prober-garuda so you should probably say yes to the replacement.

I did say yes to this but now my GRUB menu does not show my Windows installation. When I run update-grub, in the output I got an error like line /usr/share/os-prober/common.sh: line 2: /usr/lib/newns: No such file or directory and on running os-prober --help I got the same thing. So, I guess os-prober-btrfs is broken or is there any other problem?

update the system again this time it will work

i removed the offending patch

Yes, it works now. Thanks

Hi, I have the same problem. My os-prober-btrfs is on version 1.79-2 and it doesn't find my Windows installation anymore.

Windows is overrated but give it a try with

Yeah, just running os-prober (for which there appears to be no help or man page) only finds the btrfs volumes, and doesn't show Windows at all.

I just upgraded today as well, and my Windows 10 installation is no longer coming up after upgrading to os-prober-btrfs, either. I've tried the various update-grub suggestions, but they do not work, either. Whatever y'all did removed some very much-used functionality from GRUB, and it's going to force me to use the BIOS hotkey every time I want to reboot into Windows. Please fix this. It's going to become a major knock against this distribution, which I otherwise like very much and champion to others. 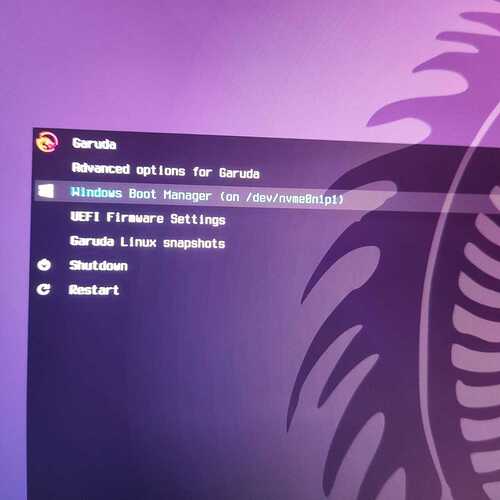 Open new topic, please, this one is solved.

I'm at the newest version, and when I run os-prober, this still happens:

Whatever y'all changed, it's no longer seeing Windows 10 on the nvme. This is NOT resolved.

This is NOT resolved.

What @SGS is saying is that the original issue is resolved. The original question was about doing a replacement. Your issue is about Windows not being detected by os-prober. You should open your own topic instead of using this one which is marked resolved.