All issues related to Garuda Linux and its assistance

First time using Garuda. I've been working with linux for a while now, but this is more than I know how to fix.

I downloaded the Recbox iso. There are problems from the very beginning unfortunately.

I was able to gain control of the desktop by escaping to command by pressing Ctrl+Alt+F2. I then put in the user and pass as "garuda". It logs in, then I type "startx" to load the desktop and I am now able to use the desktop. But then...

I realized that I had not setup things properly for installing on uefi.. usually there is no problem when using other installers, but apparently Garuda will not automatically adjust and I found other settings I had to use.

I should mention that I am attempting to install on a uefi system and dual boot with windows. Plus I am installing it on a second disk. I have 4 drives (3 ssd & 1 hdd) in my computer. windows is installed on one drive and I want to install linux on another. I have done this successfully with many other distributions. I was attracted to Garuda's Recbox because I am wanting to have a linux system for audio production. 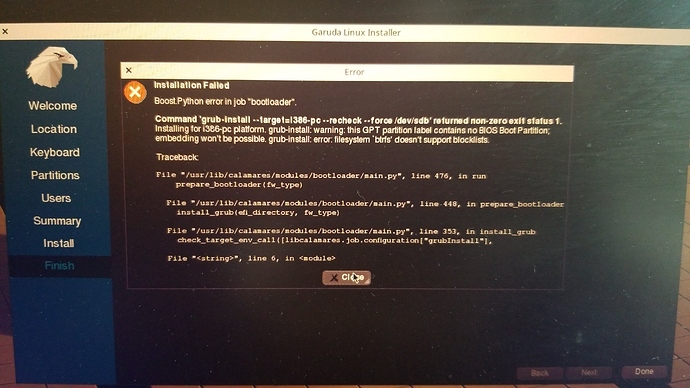 But even after following directions and putting an 8mb unformatted space/partition at the beginning of the drive and other things... it still fails and I get this message every time.

Is it possible to install garuda for UEFI dual boot? If so can someone please show me how?

Boot in uefi mode from bios

You can use etcher

I use etcher to create my usb boot. I don't think you understand. I dont have a problem with creating a bootable usb, all these issues are happening after booting the live session.

I would think that everything I posted should be clear enough to show what I'm talking about. I've even attached a picture of the live setting, showing the error I'm receiving when attempting to install to my system.

please help , i got similar issue while installing ,

I think you need to boot in uefi mode

When you go to bios boot menu

You will have two choices to boot garuda live usb

You need to boot to correct mode

Been a while since I checked this. Thanks for the reply, but as I mentioned above, there is no chance to make a correct selection because it will automatically boot past the selection screen. But, if that really is the case, then the only issue is finding a way to stop that from happening. I don't know what is causing it to do this. I will see the selection screen for half a second before it disappears and boots into the desktop.

I've been working on another distribution since posting this. I will try creating another bootable usb drive with Garuda and try again to see if I can resolve this problem. Any suggestions would be great, thank you.

I think you are misunderstanding
why you are being asked to remake the boot ISO. Perhaps your ISO or burn method/media are damaged. Use a different preferably newer flash drive, ensure that you have check summed your ISO, so you can be sure it contains no errors. Try a different means of burning the ISO to flashdrive.

It would seem to me that your session has auto-login enabled for some reason, that would likely be why you are booting directly into the running system.

You didn't provide any system specs. It would be useful to know your installed ram.

You could run this command from one of your alternate Linux versions you already have installed in your multi boot setup. What are you using as a boot manager in this complex setup you are using.

These instances always kind of make me wonder do the vast majority of multi-boot users experience problems with their setup? or are multi-boot users simply the most unlucky people on the planet.

As long as don't multi-boot any Windows instances, we are usually OK. Especially if we stay clear of grub!

I had this problem and i spent 2 days to make it work. It was simple but tricky.
1- Disable Legacy boot (boot in UEFI)
2- Disable Secure boot and hf