I'm currently experimenting with Garuda and currently i wanna reinstall it with three partitions:

A "/boot" partition, in fat32-ESP (since it's a UEFI desktop),
S "/" partition, obviously in BTRFS.
And a "/home" partition i'm considering using it in ext2.

I'm planning to go with ext2 since it's claimed to be the "fastest" filesystem.

Is it worthful or is it too dangerous?

First of all welcome to the community.
Second, I want to know where you got the idea that ext2 is the fastest filesystem.
Wikipedia article comparing filesystems

Just the reason that a filesystem is faster doesn't mean that you should use it as daily driver. Every filesystem out there has a specific use case and I think you should compare them and use it to your case.
In my case, I am using the same partition layout as you, but I am using BTRFS because of its snapshots. Now, you may have heard of snapshots and all their glory but the main dealbreaker for me is that I get this feature without using ZFS which has same feature but is used in Industry standard and is not really suited for desktop use cases.
Also, ZFS is proprietary, anyway you can use openzfs but its a pain to setup and I am too lazy.

ZFS which has same feature but is used in Industry standard and is not really suited for desktop use cases.

zfs is great for desktop use cases. I am using it on the workstation I am typing this message from.

I don't think zfs is proprietary, it just has an opensource license which many believe is incompatible with the gpl.

I don't think zfs is proprietary

There is only one way to say this https://en.m.wikipedia.org/wiki/ZFS 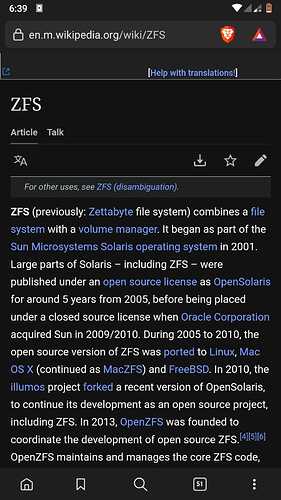 ZFS was developed by Sun which was then aquired by Oracle and distributed under closed source license.
Point is Openzfs should be great(I havent tried) . even zfs, but as long as you are care about morality of software licenses in general.
Linus Torvalds mentioned this issue in a video thats why I remember this.

It clearly states that zfs was published under an open source license. The fact that the version used in Solaris was made closed source in 2010 is pretty irrelevant because Solaris was mostly dead by 2010.

The vast majority of the zfs work done in the last 10+ years has been done on the open source forks in Illumos and zfs on Linux. As far as I know, there is no closed source zfs implementation for Linux.

My /home is on ext4 (RAID0) (Just disable things like atime/journaling if you want to speed it up.) You can disable several things on ext to speed it up (no need to go ext2) but you can also disable features to the point where things might get sketchy so mirror or backup/snapshot often.

I'm planning to go with ext2 since it's claimed to be the "fastest" filesystem.

That being said, do you have some specialized application that requires the "fastest filesystem" that make it worth giving up the benefits of btrfs?

It might not be about an application so much as maybe the drive is just garbo and he's trying to eek out every last drop of performance without buying ssd's or going RAID. OP What say you?

For example my roommate has a drive like that. On paper it seems fine (can't remember model) 7200rpm 3.5" drive, should be on par with any other...it performs worse than a 5400RPM drive that's being run my classic 80's unionized construction workers...i.e. it's always on break and it'll get to it when it gets to it.

Yeah, I would go with BTRFS (and do) for my data/home drive for several reasons:

@c00ter sweet jesus man! I haven't heard anyone mention 10k or 15k drives in ages! Does yours have a heat sink/fan and still sound like a hair dryer? I remember when having 15k SCSI drives were the tits but man the noise and heat!

I've only had 1 10k drive (think Firecuda/Baracuda) which had a big black sink on it, took two 3.5 bays. It was pretty loud. Some of the 15k I was around were nasty, all had sinks and fans on them. I fear this is a derail from the OP question (where is he anyhow?!) but I am curious why a 10K over just more RAM?

Apologize for taking too long to answer.

Yes, i can say i'm having no problems at all with ext2.

Considering my drive is not so fast, it's sorta performing similarly to ext4, maybe a little bit better.

HE LIVES~! No need to apologize. I just normally assume if someone posts there is a degree to urgency in which help is needed. Yeah well ext2 isn't broken or anything that you shouldn't use it, just not as good as a choice. I get it. I spent YEARS trying every stupid trick I could come across to let my crap hardware be just an imperceivable bit better. This often meant staying away from new stuff because new had more overhead for those new features but with the ext2,3,4 stuff you can switch it off and reap the benefits of the underlying core improvements.

Ext stands for Extended file system. In this article we can discuss about difference between ext2, ext3 & ext4 file systems in linux an...

I think this supports your findings