Just want to learn something new

I was thinking between Java and python which one do you think would be the easiest.... because last year I learned how to speak Chinese and now when I go to my favorite Chinese restaurant they don't laugh at me as hard when I was first starting to learn.

Learning languages ​​is always a good thing.
The fun factor is important.

I've really been working on my Spanish. . . someday I dream of Chile. Nothing but beautiful mountains with my Thinkpad and a bottle of Chilean wine. . . ahhh

I can speak 4 fluently and one good enough , now my writing of said languages that's a different story about 3

That is beyond impressive, especially for an American. American polyglots are almost non-existent.

I have been trying to learn English for 60 years now and still haven't figured it out...
and that's the only language that I speak.

I was a Diplomat baby, traveled all over the world before I was 18 and then when a I joined the Army I traveled some more lol on my bucket list is to go to Antarctica that's the only continent I haven't been to

I have been trying to learn English for 60 years now and still haven't figured it out...
and that's the only language that I speak.

Are you sure you're not a Newfie?

Python is easier then java

You can learn to do things sooner with Python than with Java. Just about any simple task is easier to do in Python. If you want your code to be maintained long term, Java takes the cake. Java has more typing to do and is mostly more explicit (hence the code is less prone to bugs and easier to maintain). 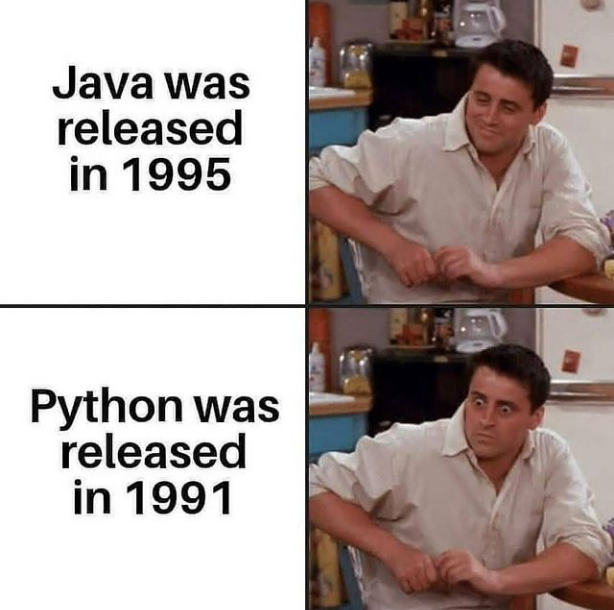 Depends on how in-depth you wanna learn.

I personally recommend Java because I started on it and it gives a very solid understanding of how the code works because you have to explicitly specify everything.

Python on the other hand will be easier to pick up but handles a lot of things under the hood that you would need to know if you want to pick up other languages in the future.

Python is just plain English with some tweaks for programming. It's very easy to read and write, but it's slow. Like one of the slowest. It's preferred for tasks that do not require a lot of computation in an of itself, or with some external stuff written in pure C. It's definitely a good starting point for non-programmer, but for some it might be an obstacle to use other languages as they do not provide the same level of comfort.
Java, on the other hand, is more traditional and sticks to explicit description of every single thing in your code, and mostly used in corporate environments for whatever they need to do. Can't say anything about performance as I'm not deeply involved with it, but it's definitely faster than Python.
P. S: It really depends on what you need to do in the end

Actually Russian and German I picked up before I was 12. My father was an ambassador to Russia. And then the former East Germany.. so when I went outside the embassy to play with kids I had to learn what they were saying.. and being a child you pick it up fast...

I honestly did not like Russia when I was a kid, but it could be different now I haven't been back since I left there in 1978..

The former East Germany was nowhere near how Russia was under communist control granted it was bad but not nearly as bad as Russia...

I honestly should go back to Russia just to see how it is now...

When I was the U.S Army I spent a lot of time in Germany it was funny a lot of the Germans thought I was in the German army.. because I spoke fluent German with a East German accent

But Chinese is probably the hardest language I had to learn since it's so tonal.... the wrong inflection of your tone can change the word entirely and you get laughed at lol....

I vote Python. Java is...let's not go there. I will add the question what is fun to you or fun to make? Chose the language that will enable to make/create the things you find most enjoyable. (watch him go and choose assembly now.)

Are you sure you're not a Newfie?

I can normally understand Newfie's just fine...maybe all that time around Mississippians screwed up my brain.