Actually.... systemd-resolved itself is pretty reliable and great for split-dns automation, especially involving VPNs with push dns. Fedora use it out of the box, and it supports mDNS resolving properly, but not registering services like avahi is still needed for, so it comes with mDNS disabled itself by default, and can still work fully with avahi-daemon in place for that.

In something like /etc/NetworkManager/conf.d/mdns.conf to turn it on globally.

The way Fedora currently does it is quite suggestive of this not supporting services, because GNOME uses mDNS to advertise DAV-based Shares over the network, and they enabled systemd-resolved's LLMNR, but kept mDNS disabled and run avahi-daemon still, because it can resolve AND setup services.

But, you can totally run systemd-resolved and avahi-daemon together.

I did try this on my own machines, and the results weren't quite as satisfying as hoped. While it worked in resolving, specifically, it did not advertise services like avahi-daemon does. You could even use the host command to look up hosts by their mDNS, which does not work normally.

There's still more room to look into this, but I don't think systemd-resolved itself is ready for replacing avahi-daemon just yet. Not for mDNS support...

But for DNS local caching, and split-DNS auto-setup, systemd-resolved it actually the best thing since sliced bread!

As for THIS specific issue for now though, I've moved everything into MR's:

This defines, during installation, enabling of mDNS resolving in the modern way of things. Combined with the following, this should be fully moved over in a transparent way...

Removed nsswitch.conf modifications here as it's moved to overlay in...

This is being removed in favor of moving it to the installation overlay for a one-time update that is then later managed by the user if ever needed,...

Removed nsswitch.conf modifications here as it's moved to overlay in...

This is being removed in favor of moving it to the installation overlay for a one-time update that is then later managed by the user if ever needed,...

This is an absolutely fantastic discussion, I'm learning stuff I have never heard before and hey, an issue is solved too!

I'll merge these when I'm at work 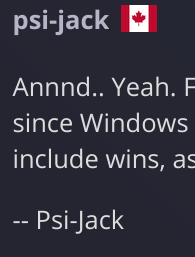 These were merged but pkgrel and checksum bumps were missing. Fixed and they should be rebuilt next hour.
(Or not? Seems like librewish sneaked them in while I was doing work stuff)

Oooof... Woopsie. Yes, I did totally forget that. Thanks for the catch.

Age-old habbit from BBS days. Which, ironically, I still run such a BBS and am still a Network Coordinator for FidoNet too.

, you don't look that old, or is it just the photo that's old?

A little bit of both, actually. I ran a BBS that, while it cost a bit up front to do, more so I was kind of borrowing the house line a bit until I got a cheap dedicated phone line added, but eventually a whole PBX setup because the local community really really liked my BBS as in the area is was the most versatile, unique, and not TAG. (I'd actually started with Renegade, then Telegard, then Remote Access with a LOT of custom made mods)..
But, the picture itself, I like even though it's a few years old now, just because I got that perfect look with the brick wall behind me. That was actually me at work at my desk, with a good firm brick wall.