Install Gnome together with KDE

Hi, I'm using Garuda KDE and would like to install Gnome in order to switch between them just by logging out. Can anyone tell me what command to type in Terminal to install Gnome? thanks

This is not recommended by Garuda. However, if you want to try it you should be able to restore with a snapshot if something works awfully wrong:

Friend, I made the command, but the downloaded file was very small. Less than 5 MB. Would you tell me if it's correct? How do I appear the option to switch between KDE and GNOME in the login area?

I have not tried it myself and am not intending to. I'm sure a good look at the Arch wiki and a search could help you a lot more than asking further here.

the downloaded file was very small

Maybe do pacman -S gnome and select all

@Lios I'm interested in the results of this experiment. Has this worked? E.g. can you seamlessly switch, and are the results satisfactory?

Its a bad idea as theming configs will most likely conflict with each other. Either use GNOME or KDE. A workaround is using two different accounts for two desktop environments.

Iirc, GDM is needed for screenlocking but in theory you can also start the session using SDDM.

but the downloaded file was very small.

Do this:
sudo pacman -S gnome-shell

But I don't recommend chocolate in yer peanut butter.

Can anyone tell me what command to type in Terminal to install Gnome?

The answer to this question is different than you might expect.
It is: "it is not for you".
When you don't have enough experience to be able to find "what is the command", then you will have several issues with simultaneous usage of both Gnome and KDE on the same account.

if you are interested about an experiment, and just want to learn more about linux, you can start it right now. We are all interested about the results and welcome your feedback.
There are some issues, but you can spot them and deal with them, if you want to gain the know-how.
As an experiment, I would suggest you don't use your primary user account for this, but create a new user, on which you would use Gnome and KDE on intervals. Track the weird issues you may face and study Archwiki and the web for ways to workaround.
Important!: Don't ask for help on Garuda forum.
Only report your feedback.

As it is already said, using KDE and Gnome DEs on the same account (even on the same system) has some unwanted consequences. It will not literally break your system, although it could break your user GUI account, depending on certain unpredictable usage.
It is not suggested, not advised, not supported.
But you may do it on your system.

I knew there had to be a good reason

So let's go! I was able to install GNOME along with the Plasma KDE and apparently everything is working normally. For my surprise installed GNOME 40 instead of 3. I will use for a while and see if there are really no problems.

For some reason Bisarro, I have Fedora 34 installed on another partition of another HD that I have in the notebook, and he "pulled" some of the settings I had there, apparently at least.

Until then I would recommend the GNOME installation along with KDE Plasma, but I am a beginner user and I do not have much property to evaluate this.

Thank you all what you answered and helped! I installed as follows: 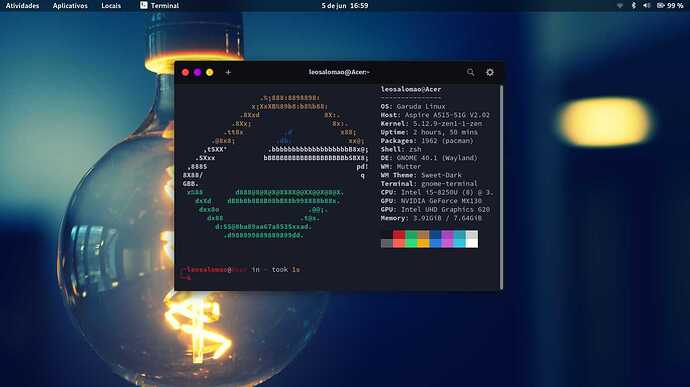 Just... don't forget to remind/mention this dual DE setup, when you ask for any issues.

Have a nice ride!