Hey how's that related haha. But nah I'm not that crazy. I did disable some network service though because it's more for servers than desktop's but that's basically it.

You should have disabled a full 50% of your services. Your computer will start in half the time. Of course your computer will also be half borked. But hey, think of all the extra seconds you could add to your life time.

Never seen a forum transform into a chatroom, is the Garuda discord active?

It's really hard not to use social media, in my case we use Facebook Marketplace as a secondary way to make money and there's no good alternative.
Peer pressure is really tough, it gets to you. WhatsApp is Messenger 2 (also owned by Facebook).

Maybe you could try to remove the TV's microphone and keep it disconnected from internet (or even put linux on it, idk if possible.

A good thing about Arch distros is that testing things is easier, the AUR really helps and the chaotic AUR is great, and if something due to the testing sticks, updating is a fast process.

I heard that advanced thinkerers, that remove X and Wayland due to being bloated, use a thing called Void Linux, but mainly because it makes them feel empty inside

Lol I hear you. I just did what systemd blame said based on the most boot time and checked to see if it's safe to disable. Honestly I'm scared to poke around in the root directory incase I break something but then I remember we have snapshots so I say screw it

I do occasionally use the microphone to be honest when my phone isn't near so I can check the time or something. And yeah the discord I think is active although I joined but haven't really used it. I have an LG TV so it's pretty locked down anyway but it has a nice oled. I assume you're running x11 on your system but wayland really is good although a little buggy at time's. Depends also on if you have Nvidia or AMD card. And I hadn't heard much before about them being bloated in those terms but if you're worried about bloat then Garuda isn't exactly light if you use the dragonised build haha. Heard of void but not used it. Seems interesting though. Conversations should probably move to discord anyway from now on as this is just meant as an introduction. Couldn't help myself though as I needed an excuse to have a break from my boxing.

Generally we're not totally against OT banter on the forum, (as long as it's not on unresolved help threads). On help requests it's not a good idea, but in the community sub-forum it's just fine.

Makes sense, imagine talking about puppies while a guy's pc is on fire.

Unfortunately, Cinnamon doesn't support Wayland for now (even mate has better support), but when on Gnome/KDE i use it as much as i can.

The Dragonized build manages to lag on my system on some animations.
Void is a rolling distro, the main difference I see is that it uses a different init system (systemd alternative) but I don't really know what else.

imagine talking about puppies while a guy's pc is on fire.

Seeing as how you brought up puppies, did I mention I have the cutest puppy dog on the planet. 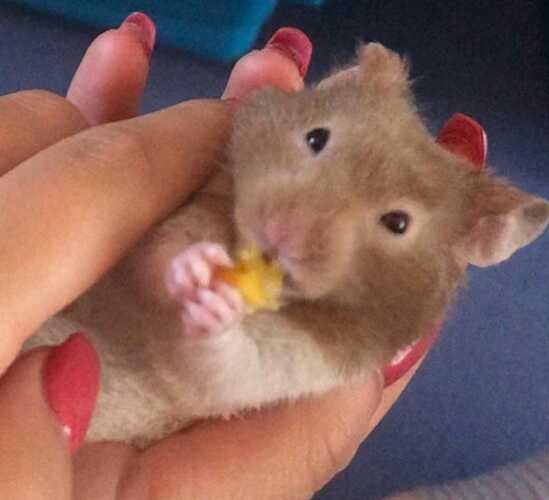 Not a dog but got a hamster if it counts

As long as it's cute it counts, and how do you type with nails that long?

I don't. That's either my mum or sister

It is weird to see few people of our age group, as we were the first born with high power

older than me and scared​

Scared? "Call me Grandpa and I'll kill ya."

Meanwhile, @Raxelgrande, welcome to Garuda Linux! (No need to be scared of me, I'm a toothless old bear.) We do have a bit of fun here, mostly at the moderators expense, though they are a great group of people--regardless of what anyone else says.

And we sometimes speak Linux, too.

Just to answer perhaps your and other young users wonder--how could us old pre-computer people so out-number younger forum members, I think the answer is easy. Forums are old-school, exactly like us anachronistic old shits. We did not grow up with them, or what pass for telephones these days. And the most modern appliance most of us had in our homes were answering machines. Do you even know what they were?

So, at my age of 70 now, when I was fortunate enough to beg use of a company-owned personal computer (almost all were so--very few individuals owned computers at home--and there was no internet yet) for the first time back in the late '80s. If you were sly enough you could get away with installing games and other nefarious stuff. So that's why--cool games 'n' shit. That's my story.

We aren't scared of social media we are wary of what uses the data harvested from us all can be put to, and why. But here's a magical story: If it were not for Facebook, I would not just this past week have been found by an unknown aunt and a first cousin from my dead father's side--and a whole passel of new kin, beside--who had been looking for me for years, and now I'm found. And I almost never, ever go there. Or so that is what it feels like to me. I'm a war orphan and never got to know my father, and now I have family. A whole family. It's been a week since I found out, and I and still too stunned to process most of it. Anyway, stuff for another story.

Social media has it's good side--when used for good, not evil, divisive shit. We just prefer a telephone call or a knock on the door.

A partial quote from a book and movie. We Were Soldiers Once--and Young.

2 posts were split to a new topic: Reccomendations for Linux voice dictation software

I have seen answering machines and i can probably figure out how to use one thanks to stories.

It's really cool to see someone who lived first hand how personal computers and the related topics appeared on the world, most of what i know from that era came thanks to my dad who was lucky as a kid who could play with an Apple II and DOS machines as kid/early teen.

Congrats on the new family! Enjoy it as much as you can, as families are not always kind, but when they are it's a wonderful thing.

For example, on my case, we moved to Argentina due to an economic crisis on Venezuela (where I was born, all of my family is Argentinian), and we were shocked at what horrendous people they are.
Basically, passive-aggressive behavior mixed with an intense "im going to end you if it was legal" hate towards us.

Oh, and please check out some story books and documentaries from your era, who knows if the writers changed stuff to favor someone, maybe even write how you lived those events to leave records from your perspective.

Thanks again for the welcomes.

Here's a quote from Richard Bach's Illusions that fits well:
"Family is not necessarily made of blood, but of those you meet along the way."

I love that book along with his others. Your quote was close, but it reads:

“The bond that links your true family is not one of blood, but of respect and joy in each other's life. Rarely do members of one family grow up under the same roof.”

― Richard Bach, Illusions: The Adventures of a Reluctant Messiah

But the important thing is that you are here. And as a good friend says, "Wherever you're at, be there."

Just to really blow your mind as you youngun's obviously have no frame of reference, when I started computing the way of programming your computer involved using punch cards. That's how much technology has changed.

when I started computing the way of programming your computer involved using punch cards.

I remember that and believe the only reason why technology changed was due to us not having the strength to punch cards anymore.

Who needs to go to the gym when punch cards are involved!