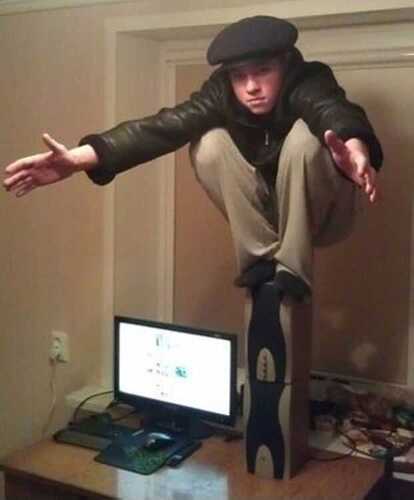 Hi. My name is Artem, I'm 21 and I writing this text mainly because I want to practice my English a bit. And of course to say hello to Garuda Linux community members

This is the first Linux distro where I registered on the forum and even wrote a few words already. I have to use casually a bunch of distros already and no one satisfied me as Garuda Linux did. Really love this distro - modern, everything works out of box and core - is the goddamn Arch (I mean I really love it). I believe this is how every modern Linux distro should look like, where gigachads of the Linux world help us, windows virgins, to use open-source software and OS.

As you can see, I have a Polish flag assigned to my profile, but actually, I just live here. I was born in Ukraine. I hope I will have a chance to travel to other countries someday in the future as well, but the main problem for me right now - it's language. I'm fluent in three languages (and 50/50 in English), but don't really plan to study one more

I'm into programming and currently work as a Unity game developer. I really like the company I'm working in, we do VR/AR stuff mainly, so it's a great opportunity for me to play (and work of course

) with the VR technologies and smart people.
The sad part here is that we don't use Linux at all. Even on the server's side

I wouldn't probably develop much for Garuda community, because I mainly write in C#, and Linux systems stuff probably was done mainly in C/C++, with which I don't familiar too much. I want to learn Vlang and do a few projects in it, but this is only a plan for now.

So, that's all from my side, have a nice day.

Money makes the world go round and M$'s near monopoly, they saved apple from being smashed as a monopolist, is just more lucrative than in the Linux camp.

Practice writing English, you say? Could have told me that was your native language and I would have believed you after reading this!

Welcome to the forums. Hope you enjoy your stay!

welcome, wingnut!
don't get spun like the rest of us ~.^

Great to see you here, comrade. If you're a VR developer, here's a very important post for you.

I don't think that anybody here likes Facebook. And after recent leaks of internal documents suggesting that Facebook and Google want to literally rule the Internet together, as well as another court from privacy advocates, their announcement of a new metaverse that can obviously be used for surveillance sounds rather spooky. But, there is always another option. I present to you Vircadia - a completely FOSS solution for metaverse interaction. It's self-hostable, scriptable, cross-platform, and …

I currently not really interested in metaverses and don't really understand this concept. Also, I believe this wouldn't become popular any time soon because of a bunch of reasons. There are only my thoughts, I have too little knowledge about VR, business and IT anyway.

We can discuss that topic in a separate thread, if you want.

Thanks for the info and greetings