I was simply curious about what the typical Garuda user was, so I thought I'd conduct a poll.

Answer as many, or as few questions as you would like.

Which OS were you primarily using before Garuda?

What is your primary usage of Garuda?

What was your primary/favorite distro before Garuda?

How long have you used Linux?

What is your age group?

How did you find out about Garuda?

What attracted you to Garuda?

What type of computer do you have Garuda installed on?

How many computers do you have Garuda installed on?

How would you rate your main laptop or desktop?

How much RAM is in your computer(s) running Garuda?

How old are your computers running Garuda?

Thank you for your time.

There is also a new poll below regarding statistics on the different editions adoption (if you'd like to participate).

Hello everyone. I thought it might be fun and informative to run an ongoing poll to find out which editions people are running. Feel free to leave comments and let us know what you like most about your favorite editions:

I can't believe all the customization that's done for us in the Dragonized Gaming Edition. Unbelievable, and most appreciated. Garuda is the best distro hands down. No contest.

I use the old KDE minimal edition that came out before Dragonized was a thing.

Build Back Better with Barebones (KDE).

I hope you don't mind that I merged both poles together

I'm actually flattered that you did, except that all the regulars, including me, have already voted in here and will likely miss mine now, and it's the regulars' votes that I wanted most. Other than that, this is a great place for it because this poll is what gave me the idea and I had hoped to see this question as I answered your poll, Could we possibly move it back to it's own thread for a few days or a week so the regulars will see it and answer before merging? Is that even possible? Or would it screw up the vote count and comments? Or maybe there is some other way to let those who have already voted know that there is a new important question? I really am very curious and it's important to me, anyway.

EDIT: I just noticed your "Revised" title. That might do it. Thank you @tbg . I'm flattered.

If the Garuda team were to investigate this in order to not build any more of the unused or little used ones, I would still see some sense in it.
What does this knowledge bring you?
Do you want to switch to the one which used the most?

Only one part for statistic fans.

Garuda Linux is a userfriendly and performance orientated distro which is based on Arch Linux. Unlike Arch, the installation process is easy and… 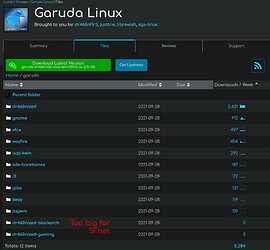 Do you want to switch to the one which used the most?

LOL. I can already guess which is used the most. Dragonized has been attracting a lot of inexperienced users (watch out Kali). i was more curious which ones the veterans think are great.

i was more curious the veterans think are great.

No matter the results, I will keep running Dragonized because I make Youtube videos sometimes and I think Dragonized is a wonderful look for that. But One of my favorite games crashes in KDE (and Gnome) so i have to have a 2nd Garuda in dual boot. I've been using Xfce for many years And my game works perfectly in Xfce, but it's very vanilla. I want to test other DEs and WMs to find which ones my game will work in and I trust the "taste" of veterans who have been drawn to Garuda. This would give me some idea what order to try them. I also just want to satisfy my silly curiosity.

EDIT: I really don't mind that our Xfce is so vanilla. I have much experience customizing my own Xfce. That's just an excuse. The truth is, after 7 years in Xfce and then trying KDE Dragonized, I can't help but wonder what else Linux has to offer in it's different flavors.

Only one part for statistic fans.
Garuda Linux - Browse /garuda at SourceForge.net

Yes, @tbg . The merge was a good idea and I'm honored you thought my poll worthy of a merge. Thank you very much!!

EEEK!! I just noticed I maxed the choices at 2. I meant to make it higher after I got a count of the choices. But 2 is okay...Better than 1. I had accidentally left the Create Poll area and had to make the choices by hand which helped me to overlook the number allowed.

Build Back Better with Barebones (KDE).

This topic was automatically closed 90 days after the last reply. New replies are no longer allowed.