Why can't I select other file system other than btrfs and fat 32 ? 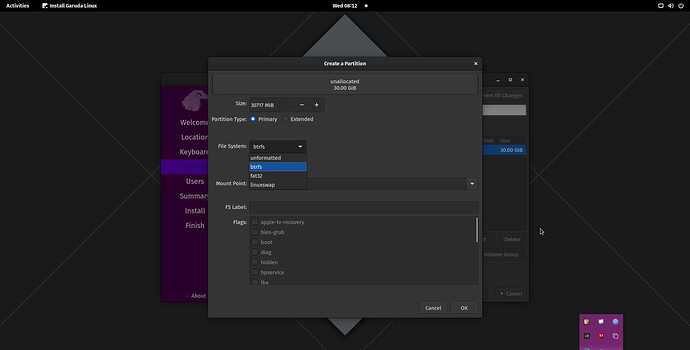 Because Garuda is meant to be working on a btrfs file system. Everything else is unsupported.
The other file system types are there for ESP and swap partitions.
Anything different could be achieved preparing the partitions before using the installer but it would be at your own risk

which filesystem should i use for /boot/efi ,fat32 or btrfs ?

EFI would of course be fat32, otherwise it's not gonna work

Unsupported by Garuda here, but I am not a big fan of btrfs yet. EXT4 seems to be faster on my systems, more responsive, plus I like other alternative backup systems (Timeshift, etc.) If you want something other than btrfs, I use ALCI or Arch Linux Calamares Installer (do a web search) which gets you pretty much a basic Arch install with the aid of a handy GUI. I then add the chaotic-aur repos which gives you access to all the Garuda default installs, etc. Never had an issue, using EXT4 with my own backup options, and I still get most of Garuda's wonderful tools and goodies to boot.

Again, this is unsupported, so you are on your own if you walk this path.

I like timeshift too, some time Garuda used it, also runs with Btrfs.
There were problems now and then with some users with Timshift.
As you can see from the questions, the OP should take what works for 99.999% of users here.

I picked Garuda Specifically for BTRFS. IMHO rolling releases like Arch should be the default for most users. If you use Arch you should use snapshots. If you use snapshots, BTRFS seems to be the better choice. Any content you really care about should be backed up off site. if your house gets broken into, fire or natural disaster takes your electronics you are not happy.

Assuming you want arch for the rolling release and AUR, and you keep files you care about backed up. The benifits of of BTRFS outweighs the possible data loss or hardware failure. Once I understood BTRFS better my concerns about data loss went away.

Just my 2 cents. If you want an arch distro and EXT4 then EndeavourOS is a good option.

I use Garuda for BTRFS, the neat tools and the community.

As you stated, these are clearly your opinions. I don't agree with them. You can reference this forum alone, the number of new users that come here wanting it to 'just work' out of the box. A rolling release is not for a newbie IMHO. Repos move at a faster pace than say a Debian Stable, thus increasing the likelihood of breakage. I have been on Arch for a long time to know this is true.

There are plenty of options to back up your system both in-house and out, so BTRFS is YOUR choice because it suits YOUR needs, not mine, and many others.

Yah completely disagree. I was told go with an ubuntu distro. I started with mint like 8 years ago. It was horrible. Everytime I wanted to install software I had to figure out which version of ubuntu I was on, add some ppa, do some random stuff. Driver issues all the time. I couldn't get games and lots of programs to work. When it was time to upgrade you had to uninstall things, remove PPA, revert to older versions then do upgrade, maybe it works. After 3 years tried POPos, still Awful. Did manjaro for a bit, it was much easier to use but still not there. You had to do too much out of the box. Then I tried about 100 different combinations of distros, DE, WM. In the last 3 years+ of using an arch based distro, I can honestly say, ALL new users should use an Arch distro with a snapshot program and the ability to restore from Grub. Garuda fits the bill. I have gotten dozens of brand new Linux users to install Garuda or Endeavour. Arch Distros are my goto for new users, no one has ever been unhappy with Arch distros. I do agree new users should not use basic Arch. The learning curve is too steep.

If Arch didn't exist I would say NIXos is a good choice. A distant 3rd would be a Fedora distro like Nobara.

Arch just works. Even if you don't do updates all the time, it keeps working. AUR with PARU is awesome for installing non official software.

I think the only reason people tell newbs not to use Arch is most Arch users are traditionally RTFM type people. They don't want to take the time to explain things. Which would be fine if they just said nothing. Sadly they typically make some negative comment and share an arch wiki page which means nothing to most new users. Seems like Every day there are more and more Arch users willing to help each other.

As long as new users has some sort of snapshot program installed rolling release is the way to go. Something breaks, try to fix it, if you can't get it, just jump back, wait a few days, maybe a week and things typically fix themselves.