All issues related to Garuda Linux and its assistance .
This is the image when i run fish. 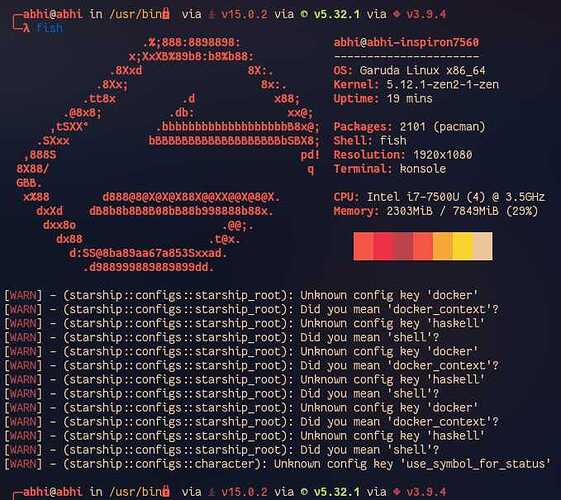 So, i checked the config.fish file in .config/fish directory and it has this /usr/bin/starship in it. So, i tried to open it and some of it is unreadable format. I am getting this after i upgraded my garuda.
any solutions? any advices?

No picture from terminal output

How and where to report bugs

Use forum search function first, it is explained more than one time

You have been a member of our forum for a while now. Generally, newbies are the ones who do not search errors and then post pictures of the errors on our forum. This practice totally defeats the entire purpose of the forum as a searchable reference source. Pictures are not searchable and therefore are forbidden to be posted on technical help requests on our forum. When you post an error message as a picture it not only makes it more difficult for forum assistants to help you, it makes it far more difficult for other users to find solutions to similar issues.

This is a never ending battle with newbies that has gotten beyond manageable. We have now had to implement a policy forbidding new users from posting media in an effort to curb this practice. New members had simply been rebuked for doing this in the past, but this had to be changed to put an end to this ongoing problem.

Any user who has been a forum member for a while should already know posting pictures of error outputs is a violation of our forums posting guidlines. Users who have been forum members for a while now should already know this practice is unacceptable on our forum. To put an end to this problematic practice more stringent measures had to be implemented to encourage users to comply with our posting guidlines.

Asking users politely to refrain from posting pictures on technical help threads has been totally ignored by almost all users. Some users have even continued to repeatedly post pictures when rebuked by multiple moderators many times on the same thread.

This practice of posting terminal outputs as pictures must be curtailed, and asking users to do so politely is not working. Therefore, we may now be disciplining users for flagrant violations of our forums posting policies. In the future posting a picture of an error output that has been posted many times before may result in an official warning and a suspension of forum privileges.

The error message you posted has been posted many times before and you obviously have neglected to search your issue as expected on our forum. As such, you are being officially warned and suspended from the forum for a week for violation the forums posting guidlines as specified on the Garuda Wiki.