I used the current ISO to give this version a spin.

The minor issues below do not functionally make the ISO not work or anything, these are just minor details that might help make the iso more polished.

Alacritty has a configuration error in the iso,

On line 602 of the yml file, beginning at character 27 all the color definitions seem to be repeated. This makes Alacritty have an error every time it starts up, but doesn't' prevent it from working. Screenshot at the end shows the yml file on the leftmost alacritty tile and the error that shows when you open alacritty is at the bottom of that tile.

I noted two other minor things.

I was unable to update the ISO due to an unrecoverable conflict. Maybe I shouldn't expect to be able to do that? But I wanted to do that to really try it out before having to do a full installation so I wanted to mention it in case this was just accidental. I wanted to update and install a couple things to try out bspwm in more detail, for example I wanted to install vi to edit the bspwm configs since I feel handicapped in micro.

Another similar issue was with flameshot, which though installed, was missing dependencies so I was unable to use it to take a screenshot. I used imagemagick directly to do so instead, here is a shot that shows all three of the items. 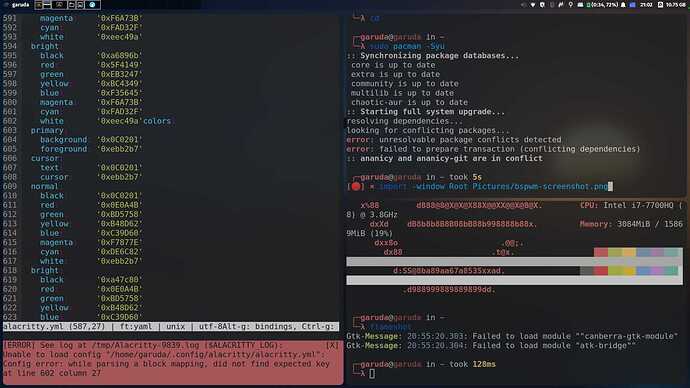 Just to be clear, I'm not trying to fix anything, I just wanted to let the development team know just in case these things warranted update.

On line 602 of the yml file, beginning at character 27

Its not in my

flameshot , I cant check, its not in my dependencies from i3wm.

Yes, I thought it was a little odd that I wasn't offered that option. You can see it in the screenshot in the upper right tile. I tried it a second time even since I thought it might have been a fluke.

Mh, I see now, you are the second. On i3wm no problem.

I check this on my other Garuda DE's.

There's no conflict in the KDE Dr460nized.
Neither in KDE Multimedia, at least not with me.

I tried to look up a topic about this it did exist but got deleted what do i do about this? conflicting dependencies: ananicy and ananicy-git are in conflict I can't download anything until its fixed any help?

This topic was automatically closed after 5 hours. New replies are no longer allowed.