Hi,
Launched an update today and when I rebooted the PC it shows only a black screen and mouse pointer.
I switched to tty2 and checked latest boot.log and Xorg.0.log and I didn't see any errors.
Now I'm using a snap from yesterday and it's working fine, but I'm not able to detect which of the updated package was causing the problem.
I usually check for updates every one or two days, so should be something released in the last two days.
Any idea on how I can troubleshoot this?

I switched to tty2 and checked latest boot.log and Xorg.0.log and I didn't see any errors

That's unusual. Are you sure you checked properly?
What/how did you check?

I had this issue after updating KDE-desktop, I didn't see any obvious errors, so I just rolled back with a snapshot and then ran the update a day later, no problems after that.

I started to see errors when I tried to launch X. There was a syntax error on line 42 of /root/.xinitrc but I checked the file and the syntax was ok, even after the repo and package update.
then I rebooted to the snap that was working and I enabled the gstreamer codec and user in video group,
updated repos and launched the full update. Now that snap is updated and everything is working fine.
I don't know exactly why is working now, is very possible that since I'm a noob on Arch I did a mess with something.
Now I deleted all the snap newer than the one I'm running now, and created a new one manually, but I still see the deleted ones in grub and the new one is not there, I need to manually select the snap to boot in the one that works, otherwise it will not boot.
I just need to figure out how to update the snap list on grub.
Thank you very much to all for the help, I'm start feeling very proud to have joined this community,
And thanks to all Garuda team for this amazing distro! 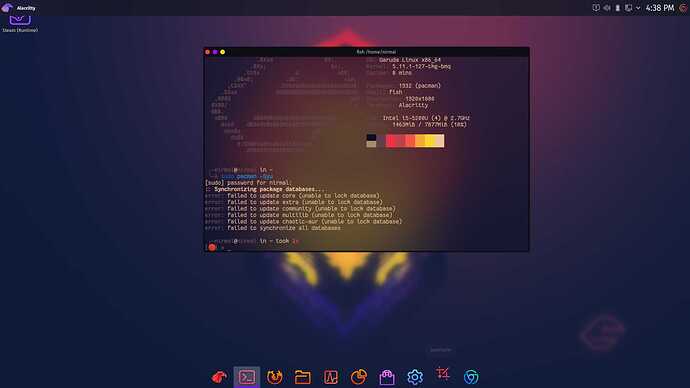 Remove the pacman database lock by typing fixpacman
Also please copy the output in here rather than using screenshots.

sudo update-grub didn't worked for me, the command recognized the snap i had but after the reboot the ones in the menu was not updated.
I tried to downgrade grub, run update-grub, reboot, upgrade grub to latest version and run update grub again but I still had the same issue.
So i deleted all snaps except the one that was working, and created another one.
after the reboot in some way I messed up the working snap too because it had the same issue with the screen...
At this point, I reinstalled Garuda from scratch since I had the home directory mounted on another disk and was easy to restore after the install.
Lesson learned, don't mess up with Arch if you don't know what you're doing.
I'm not new to Linux, but I am new to Arch, I need to embrace Arch philosophy and become more skilled even if Garuda makes things a lot more easier than vanilla Arch, it still need maintenance, is not a set and forget OS.